CFOs Are Focusing on Automation Investments to Drive Down Costs

CFOs plan to protect their digital investments as they cut costs elsewhere in the business, according to recent surveys by Gartner, Inc. Among technology priorities, CFOs have particularly prioritized back-office automation as a key to driving down costs in the face of ongoing inflation.

A July 2022 survey of 226 CFOs found that digital acceleration was the top spending priority for CFOs over the next 12 months, with 98% of respondents saying they will protect digital investments and of those, 66% stating they plan to increase their investments in the category.

A separate survey of 128 CFOs and CEOs in June highlighted the particular areas within technology that are set to receive the most investment: one third of respondents said they will prioritize back-office automation technologies, the most popular choice among 13 different categories of potential technology investment (see Figure 1).

“Automating back-office workflows is a key to achieving efficiency gains across a number of areas including accounts payable, accounts receivable and internal IT services, such as helpdesk support,” said Randeep Rathindran, vice president, research in the Gartner Finance Practice. “In a cash-constrained environment, where margins are under pressure, the urgency to improve productivity in these areas is heightened.” 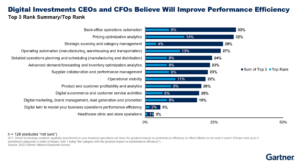 Survey respondents also indicated their plans to increase investments in pricing optimization analytics, with 32% of respondents prioritizing this area among their top three priorities. With CFOs recognizing limitations to price hikes over the long-term, pricing optimization analytics is a way for organizations to improve pricing precision while also pursuing other strategies to mitigate inflation’s impact on margins, such as cutting costs.

Gartner’s survey on CFOs’ investment priorities also revealed the areas most vulnerable to cost cuts over the next 12 months. Forty-six percent of respondents indicated they will cut spending on consultants, while 45% said they will decrease spending on real estate. Contractor spend was also targeted by 39% of respondents.