“The activity of internationally mobile jobseekers is on the verge of returning to pre-crisis levels”, the recent Indeed Hiring Lab report reveals. The report aims to help businesses adopt the best practices when it comes to preparing for this current transformation. Where does Luxembourg stand in attracting international talents?

As jobseekers’ international mobility was on the rise during the crisis linked to the pandemic, this trend appears to gradually go backward. Yet, there are still some key features that can attract foreign talents to cross borders, such as higher pay, remote work, labor shortages and geopolitics. Bearing this in mind, it is no surprise that high-income countries do attract most jobseekers.

This does include Luxembourg, which dominates the ranking enumerating the most attractive countries for jobseekers, followed by Switzerland and the United Kingdom. This statement is comforted by the net interest score. This metric encompasses both a country’s attractiveness as a destination for jobseekers based in other countries, and the propensity of that country’s jobseekers to search for jobs abroad. 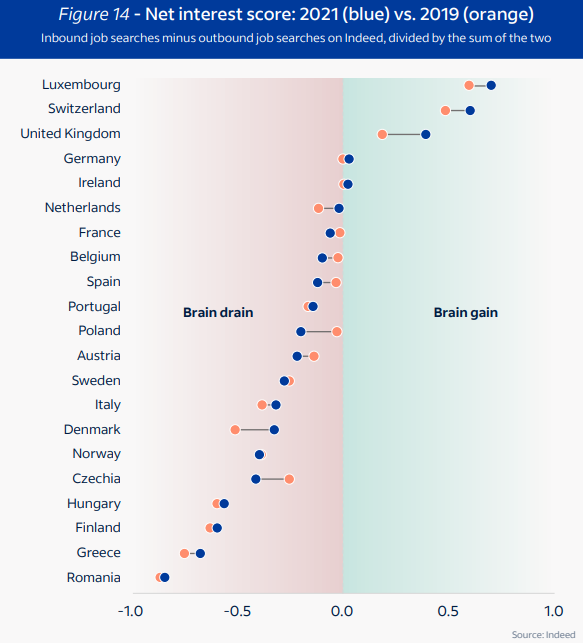 It is to note that most European countries obtained negative scores, which means that there are more outbound searches than inbound ones. The Indeed Hiring Lab refers to this as a “brain drain” issue. On the other hand stands the top three, which Luxembourg leads, referred to as “brain gain”. In 2021, 74% of all job searches on Indeed’s Luxembourg website were inbound from jobseekers outside the country whereas only 32% of searches were outbound from jobseekers based in Luxembourg.

Overall, the report highlights the importance for employers to “learn where foreign candidates are from and what jobs they’re interested in”. This reminds of the ADEM strategy plan – revealed last June – to attract and retain international talents via the Work-in-Luxembourg.lu website.