Like many countries, Luxembourg is seeing its post-pandemic recovery lose momentum as Russia’s war of aggression against Ukraine weighs on economic activity and drives up inflation, according to a new OECD report.

The latest OECD Economic Survey of Luxembourg says policies to cushion the impact on households from rising costs should be targeted and temporary to avoid adding to inflationary pressures and to maintain incentives for energy savings. Over the longer term, sustaining the country’s high living standards will require measures to enhance productivity growth and reform the pension system to lengthen the time people spend in work.

Headline inflation in Luxembourg reached 8.8% in October, with high energy prices and a tight labour market exerting upward pressure. While direct exposure to Russia is low, Luxembourg is feeling the impact of slowing economic activity in Europe caused by the war in Ukraine, supply chain disruptions and COVID-related shutdowns in China. The Survey projects Luxembourg’s GDP growing at 1.7% in 2022 and 1.5% in 2023.

“Luxembourg’s immediate challenge is to tackle inflationary pressures, which are expected to persist. Support for energy efficiency investments and allowances for disadvantaged households are better targeted than price caps and can help reduce energy demand,” OECD Secretary-General Mathias Cormann said, presenting the Survey alongside Minister of the Economy Franz Fayot, Minister of Finance Yuriko Backes and Minister of Energy Claude Turmes. “For the longer term, the focus should be on increasing investment in a low-carbon economy, more research and development to enhance productivity growth and on taking steps to better align the retirement age with longer life expectancy.” 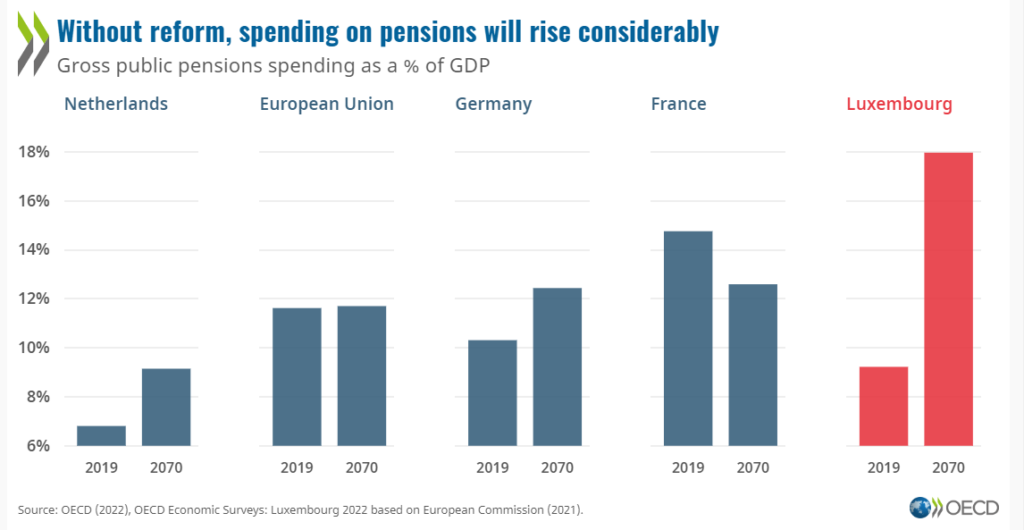 Taking action to extend working lives would help to improve the sustainability of growth and public finances. With a quarter of men retiring at 54 years of age or younger and, in the absence of reform, the old-age dependency ratio expected to more than double to over 56% by 2070, the Survey recommends reforms to link the retirement age to life expectancy. This would help avoid younger generations facing higher taxes and lower pensions.

Increasing private investment in research and development, which lags public investment and means overall R&D spending is below the OECD average as a share of GDP, would help to boost productivity and GDP growth. More could also be done to ease burdensome regulatory restrictions, lighten professional licensing rules and help smaller firms to adopt digital technology. Improving adult skills to bring them more in line with employer needs would also help to boost productivity.

The Survey notes the urgency of increasing the supply of housing to address the rapid rise in property prices, which have risen by 9.7% a year on average over the past five years compared to an EU average of 4.9%. It welcomes a government proposal to introduce a national property tax on unused land and buildings, which will help to tackle land hoarding.

Finally, the transition towards a low-carbon economy is an opportunity to support stronger and more sustainable growth. Luxembourg’s progress in lowering greenhouse gas emissions has slowed in recent years. A rise in transport emissions, partly linked to urban sprawl, has pushed up overall emissions since 2015. It is important to accelerate progress towards net zero emissions, as set out in Luxembourg’s climate strategy to 2050. Encouraging greater energy efficiency of housing, denser housing can support lower energy consumption and reduced car use. Tax credits and municipal funding incentives should support greener housing, built in line with the Master Programme for Spatial Planning. In the medium and long term, there is also a need to raise carbon prices to send clear investment signals and help achieve its net zero emissions target.

Source: The Organisation for Economic Co-operation and Development (OECD)
Share on

Trade in your own style