–1,234 sustainable bonds were listed on the Luxembourg Green Exchange at end December 2021, up 47% year-on-year, amounting to a total of €640 billion;

–Private banking assets continued on their upwards trajectory, reaching €508 billion, up 9% on the previous year.

Luxembourg’s multijurisdictional expertise, economic stability, and pioneering position in terms of sustainable finance continue to make it a leading international financial centre within the heart of the EU. The country saw 77 new entities being licensed to operate over the course of the year.

Luxembourg’s FinTech ecosystem similarly saw continued interest and remained a popular destination for these firms looking to offer services to the European market. In total, 220 financial technology     firms now operate out of the Grand Duchy, a 10% increase on the previous year. At the same time, the Luxembourg House of Financial Technology (LHoFT) saw the number of FinTech’s it hosts increase to 80 (up by 5% compared to the previous year), while the number of members on the platform increased to 85 (a 6% increase year-on-year).

Commenting on 2021, Nicolas Mackel, CEO of Luxembourg for Finance, stated: “Continued uncertainty stemming from the Covid-19 pandemic meant that financial services had to continuously react to shifting circumstances throughout the year. Despite this, Luxembourg-based players weathered the year well and managed to grow both their assets and their operations.

Luxembourg has emerged as a clear frontrunner in the field of sustainable finance, due not only to the expertise found within the Grand Duchy’s ecosystem, but the drive from all players in the country who have understood the need to build back better, and the role finance will play in funding a sustainable and equitable economic recovery.

Given the rising economic and market volatility that characterised the final quarter of 2021 and the beginning of 2022, Luxembourg’s stability and financial services ecosystem proved to be a strong draw for international firms.”

Luxembourg’s investment fund industry saw nearly uninterrupted growth during 2021. After having surpassed the €5 trillion mark at the beginning of the year, assets under management climbed to reach €5.859,5 trillion by the close of the year, an 17,8% increase (cf. Figure 1). While favourable markets accounted for a significant portion of the increase, almost half is due to net new money, again demonstrating the appeal of Luxembourg-domiciled funds to international investors. 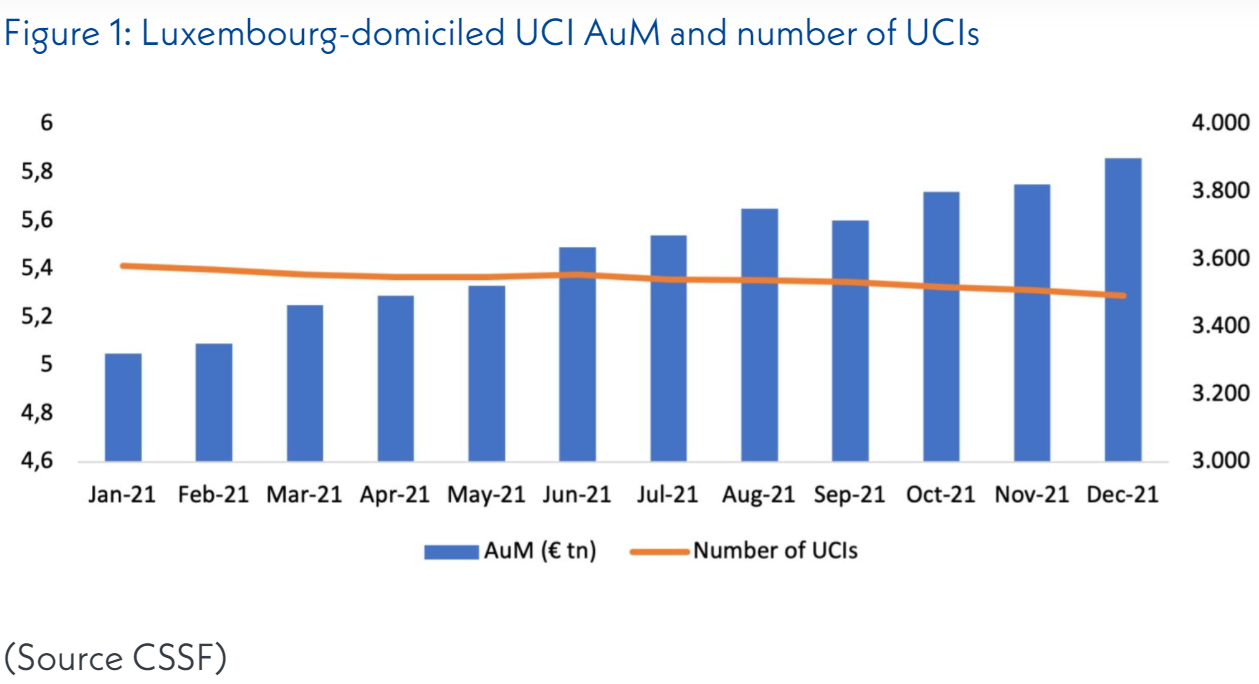 Private equity activities within the country continue to steam ahead, with assets under management in private equity and venture capital funds growing by just under 30% over the course of 2021, from €190 billion to €255 billion.

The launch of the Luxembourg Sustainable Finance Strategy, in March 2021, marked a further step in the Grand Duchy’s move to become a leading sustainable finance hub. The country remains that largest hub globally for ESG funds and accounted for 44% of total European ESG fund (Article 8 and Article 9) AuM as of H1 2021.

The Luxembourg Green Exchange, which celebrated its fifth anniversary during the year, has a leading global market share of the world’s listed sustainable bonds, with 1,234 sustainable bonds listed at the end of December 2021, up 47% since the beginning of the year (cf. Figure 2). Beyond the 5-year anniversary of the LGX, the year was marked by the Luxembourg Stock Exchange serving as the launchpad for the EU’s NextGenerationEU stimulus package; being the listing venue for the first €20 billion bond of the package in June and the €12 billion green bond issued in October – the largest Green Bond ever issued globally.

Throughout the course of 2021, 560 sustainable bonds were added to the LGX list, amounting to €246 billion. By the end of the year, the total volume of sustainable bonds listed on the LGX had reached €640 billion.

As of end-December 2021, LuxFLAG had issued labels for 365 investment products, including 282 ESG labels. This represents a 13% increase in assets managed under LuxFLAG labels to reach a total of €190 billion. Towards the end of the year the labelling agency also launched a new label for sustainable insurance products, of which five have already been awarded.

The banking sector continues its consolidation

Having had to rapidly adapt to remote operations, the banking sector quickly returned to a normal rhythm. In the private banking sector, AuM continued on the upwards trajectory seen since the end of the global financial crisis and now stands at €508 billion, marking a new compound annual growth rate of 7% since 2008. This is not only linked to the strong performance of financial markets, but also to the injection of new money into existing banks within the Grand Duchy and to the transfer of activities in the context of Brexit.

Given the trend of increasing consolidation, the year saw the number of players fall by four, with 124 banks from 26 countries operating in the country at the end of 2021. However, the year also saw Itau BBA Europe set up activities within the Grand Duchy.

2020 marked a slowdown in the growth seen in 2019, largely as a number of Brexit-related shifts in the non-life insurance sector were concluded that year. Additionally, this was compounded by Covid’s effect on the life sector which saw premiums drop. 2021 saw a significant bounce back, with life insurance premiums up by 42.7% in the first three quarters of the year. Non-life premiums, which did not suffer the same drop in 2020 continued their upwards momentum, with premiums up by 11.9%.

Despite a fall in the number of licenced entities, from 286 to 279, Luxembourg’s insurance industry remains robust with total premiums up by 29.4%.