Russia-Ukraine: a lot of bad news already priced in, but the outlook is deteriorating

Market Reactions: markets remain highly volatile, with equity markets down but with some recent signs of stabilisation. Oil remains under pressure after the embargo on Russian oil instituted by the US and the UK. Demand for safe-haven assets, such as gold, is still high. Whilst a process of restauration of value is underway (initial repricing initiated prior to the crisis, crisis consequences on European assets then), it is incomplete and fragmented. In particular, it remains to be seen the real life impact of the first stages of “normalisation” confirmed by Fed and ECB. This argues in favour of a bit of patience as the likely additional volatility will offer entry points.

Outlook: we have downgraded our global growth forecasts as the global economy will be impacted by higher energy and food prices, both on the demand and production side. Europe is the area where stagflationary risks are highest and a temporary recession will be possible in 2022. China, however, should continue to contribute to stabilising global growth.

Earnings expectations and equity outlook: a lower growth environment and prices trending higher will pressure margins and could potentially lead to an earnings recession. While we think the US can avoid this, Europe is more at risk. In our view, current market corrections incorporate most of the bad news, but some further retracements are possible, although limited, unless further escalations in the crisis put the global economy at risk (not our base scenario). Bearing this in mind, we maintain a cautious stance on equities, but are prepared to add risk as an improvement in the crisis could trigger a relief-rally, in particular in European markets.

Main convictions: we keep a mildly-cautious risk allocation, with a focus on inflation resilience in stock and credit selection. Duration is played actively within a short duration stance, as we recognise that higher inflation will drive yields higher in the mid-term but shortterm dynamics could provide tactical opportunities. In credit, we stay watchful of liquidity risk.

The second week of conflict in the Ukraine was marked by additional market volatility. Equities are down across the board. The demand for safe-haven assets temporarily pushed the 10-year Treasury down to 1.7% before it retraced to 1.9% amid rising inflationary pressures. Meanwhile, gold has remained well supported, briefly moving above $2000/ounce. Regarding the whole market, uncertainty remains very pronounced, with commodities facing particularly acute pressures. The joint US/UK embargo on Russian oil has pushed the price to $130/bbl high. European gas is up +200% YTD.

After several rounds of negotiations, the conversation on the war front has shifted towards Russian demands regarding the breakaway regions of Donbass and Crimea. However, a quick resolution to the conflict is highly uncertain at this stage. Against this backdrop, market attention is turning to an assessment of the macro outlook.

The conflict will impact growth and inflation, particularly through higher energy and food prices. We have revised our global growth forecasts downward and raised our inflation expectations for 2022.
While it is still difficult to anticipate how macro fundamentals will be impacted by the crisis, we expect Eurozone inflation to remain stubbornly high through the year, particularly for energy and food, negatively affecting both demand and production. This outlook is consistent with a temporary recessionary outcome on the lower end of our projections. Overall, we have downgraded global growth by 0.5% (taking it into a 3.3-3.7% range) for the year.

Global inflation has been revised upward across both EM and DM (by approximately 0.5% over 2022), based on the different weights of the energy component in CPI baskets.
For Eurozone inflation, we now see YoY CPI in a 4.5-5.8% range and at 5.7-6% for the US in 2022. Additionally, the lowest band in our EU growth forecast is consistent with a stagflationary scenario, or even a temporary recession.
There are, however, many divergences across countries, depending both on their level of energy independence and their vulnerability to spill-over effects from sanctions. 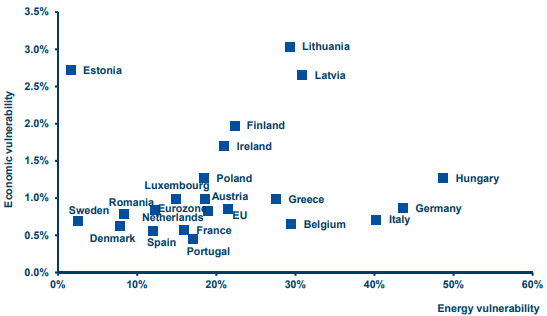 Source: Amundi Institute, Eurostat, OECD, World Bank. Data are as of 2 March 2022. Economic vulnerability is measured as the share of country gross value added in Russian domestic demand and exports]. Energy dependence on Russia is measured as the share of imports of natural gas, oil and solid fuels from Russia over total imports, weighted by each country’s energy dependence

On a more positive note, China’s economy should continue to support global growth. The country has embarked on a new easing cycle for 2022, in contrast to other economies that have started to wind monetary policy tighter. Last weekend, the Chinese authorities declared a 5.5% target growth rate for this year (above our initial expectations).

Most of the bad news is already priced into the market, but much will depend on the evolution of the crisis.

The economic outlook is deteriorating and what was previously considered the alternative scenario is now materialising. For this reason, we remain somewhat cautious on equities, particularly in Europe.

On the whole, market drawdowns have followed two sequential events:

1. The January sell-off from the peaks reached early in the month were driven by strong inflation figures and consequent monetary policy readjustments. In this context, all inflationary trades performed well in relative terms (value vs growth, EUR vs USD, financial vs commodities, and so on). Hence, the first part of the YTD sell-off was not a reverberation of the shock from Ukraine but rather a normalisation that was already in the cards following an exceptional end to 2021.

2. In February and March, the Russia-Ukraine conflict hit the Eurozone much harder than the US as sentiment regarding the new economic outlook started to sink in. The current total drawdowns (-12% in the US, -17% in the Eurozone, at March 10th) are consistent with a significant correction for risk premiums.

In view of a deceleration in growth and inflation trending higher, and assuming no further deterioration (which at this stage is the most likely scenario, at least for the US), then current levels are appropriate. However, under a mild profit recession scenario in the Eurozone, then markets have not retraced completely

European equity markets have been adjusting to lower economic expectations

Source: Amundi Institute, Bloomberg, Sentix. Data is as of 9 March 2022. Sentix Economic index — Euro Aggregate is a sentiment indicator designed to measure the economic sentiment six months out and it’s based on a survey among institutional and individual investors and analysts

So, basically, the big question marks relate to earnings, and the potential for a severe profit recession. Coming into this year, we were already assuming a normalisation in the EPS trend at a global level. Three months in, risk had tilted to the downside, given the stagflationary impact of the ongoing crisis. We believe EPS should be revised down in Europe more than in the US, as the latter’s GDP growth is expected to be stronger.

• US earnings outlook: US growth above 3% has generally been sufficient to achieve positive earnings. So, through the current lens, an earnings recession can likely be avoided. Here, we expect EPS growth to range around 0-8%.

A more adverse scenario of a deep profit recession tied to an economic recession, like the Great Financial Crisis, is a low probability event, in our view, albeit not impossible should the war in Ukraine escalate to a serious global energy crisis. In this case, markets would be halfway through a painful bear market.

We entered the crisis with a value call that remains valid so long as there is growth potential (no recession), with inflation and rates trending higher. As the value rotation was very strong in January, we’ve tilted to quality in this value call, which helped during this phase of the market. We recently added some defensive positioning and continue to focus on the inflation theme in our selection approach as a way to navigate the crisis.

Focusing on European markets, a lot of the bad news is already priced. On a 12-month forward PE, the MSCI Europe is near 20-year lows vs the S&P500, which conveys a sense on how significant the European impact has been. In the long term, this will matter. The fundamentals (Europe’s high vaccination rate, growth recovery potential and policy support) are sound, and higher growth from China can also help. The fiscal push will also be important. More clarity on this front can be expected in the coming days from the informal meeting of the European Council in Versailles (10 and 11 March), which will discuss how to boost European defence capabilities and reduce energy dependency.

For now, Europe is a beta region, with close proximity to the escalation, and awareness is key. But if the war does not extend long enough to suffocate economic growth in Europe to the point of recession, there is space to search for buying opportunities.

Our main convictions include the following:

• The economic outlook has deteriorated and the main scenario is now less benign, with lower growth and higher inflation (particularly in Europe over the short term). Despite higher risks to the downside, we don’t anticipate a global recession.

• Chinese growth should remain sound and help support the global economy as well as being a catalyst for the European recovery once the worst of the crisis has passed.

• Volatility will remain high and, despite strong market corrections, we maintain an overall cautious approach with hedges in place against the uncertain outcome of the crisis.

• We continue to hold a short duration bias and we remain tactical in adjusting our duration stance, as this can assist with hedging during periods of turbulence.

• Any geopolitical relief could trigger a rally. With most of the economic uncertainty already priced into the market, we are prepared to tactically adjust our risk stance. Assuming no drastic deterioration on the war front, we are approaching the time to seek entry points.

• In equities, we stick to a value/quality tilt, with some addition of defensive names. It remains important to be highly selective and focused on inflation resilience in assessing opportunities.

• In credit, risks are more related to liquidity than fundamentals at this stage. Financial conditions are tightening, so it’s important to stay on the lookout for liquidity risk.