The Ukraine crisis: what's at stake for investors?

Three scenarios for the global economy and financial markets.

The invasion of Ukraine by Russian troops on February 24th is one of the biggest geopolitical shocks in a generation.So far, the market reaction has been muted, apart from a jump in oil and commodities prices. Acute pain has however been felt by foreign and domestic investors in Russia, whose economy and financial markets are being crippled by sanctions and other bans on business activity. European assets have suffered relatively modestly, with equities down 4 per cent since the invasion to offer a 20 per cent discount to the global benchmark, and the euro weakening to trade at its steepest discount to fair value since 2002.

Implications for the global economy and markets

Events in Ukraine have added to the ‘stagflationary’ risks that were emerging even before the invasion. Growth projections were already being trimmed while inflation forecasts were being revised up.Clearly, the biggest near-term risk is an inflation spike triggered by disruptions in the supply of Russian oil and gas, which would lead to a significant loss of economic momentum and, potentially, a recession.Our analysis shows that every time the oil price surged 50 per cent above trend – as it has now – a recession followed. Even though the world is less reliant on oil than a generation ago, crude still makes up a substantial slice of global GDP and it drives inflation expectations and, in turn, consumer confidence.The impact of these shocks won’t be evenly distributed. For instance, the euro zone’s dependence on energy imports from Russia – they represent 40 per cent of the region’s gas consumption – leaves it particularly vulnerable.At the same time, large public sector budget deficits and high inflation rates leave limited, if any, headroom for additional fiscal or monetary stimulus from the world’s major economies. The market still expects US interest rates to rise some 150 basis points this year. As for the euro zone, the market is discounting two rate hikes this year – down from three before the invasion. And while a European Central Bank intervention to support the euro zone can’t be ruled out, it would take a bad recession or spreads on Italian government bonds to move above 250 basis points for the ECB to launch fresh stimulus.

But even if the risks have clearly risen, it is important to highlight that geopolitical shocks tend to be short-lived. Typically, crises such as military conflicts trigger a 10 per cent decline in equities over a period of one to two months, only for that sell-off to give way to strong rally once a resolution begins to take shape.

Scenarios and stress-testing our base-case

While it is impossible to know how events will ultimately unfold, we explore three scenarios: de-escalation, entrenched conflict and deepening crisis.

We have stress-tested our models for US and European earnings growth and 10-year US Treasury bond yield on what we think are plausible macroeconomic outcomes.

De-escalation. Our base case scenario, to which we attach a 50 per cent probability, is for a de-escalation of the conflict that envisages Ukraine and Russia agreeing to ceasefire within weeks and engaging in constructive talks. The most punitive sanctions – such as the ban on Russian banks from the SWIFT global payments system and the freeze on Russian central bank assets – are lifted, but most other measures, such as a freeze on assets owned by individuals and entities close to the Russian administration and export restrictions, remain in place. The outlook for growth and inflation is unlikely to deviate much from what we previously envisaged for 2022: US and European growth remaining comfortably above trend and inflation peaking in the current quarter. The US Federal Reserve‘s policy tightening should remain on track, in line with the market’s current expectations of interest rate hikes for the year starting this month. However, the risk of the US central bank pivoting to a more hawkish stance at the cost of throttling growth is largely off the table. In this scenario, global equities could rise by up to 15 per cent by the year-end, boosted by a 10 per cent rise in corporate earnings. Ten-year US Treasury yields rise gently, settling at around 2.2 per cent. We would expect equities to be the best performing asset class and retain our bias for cyclical value in this scenario.

Entrenched conflict. This possible, if undesirable, scenario envisages a prolonged war of attrition. The West imposes even more sanctions although the response from Russia is limited. A mild recession in Europe ensues – economic output contracts 1.5 per cent in 2022 – while US GDP growth slows close to the long-term trend of 2 per cent. Inflation remains higher for longer, weighing on consumer sentiment and delaying the recovery in consumption and services. Weak corporate sentiment, especially in the euro zone, should dampen investment. Global equities decline by as much as 10 per cent from current levels as corporate earnings fall 10 per cent. Ten-year Treasury yields settle below 2 per cent by year end at about 1.7 per cent. In this case, we expect the European Central Bank to remain on hold with an easing bias. The Fed will ease the pace of its tightening but should still deliver a few interest rate hikes this year. This, on the margin, is a move in the stagflationary direction with commodities, US equities and high-quality stocks expected to perform the best.

Deepening crisis. The worst-case scenario is for the conflict to broaden and draw NATO to get involved more explicitly. A full-scale trade blockade is put in place by the West; Russia responds by cutting energy supplies. The result is a global recession which sees the euro zone economy contract by 4 per cent and US growth slide to a mere 0.5 per cent. The impact from the crisis on the European economy will move beyond second-round effects as industrial production is hit due to shortage or rationing of energy supply. Equities fall by as much as 30 per cent as corporate earnings decline by 25 per cent. Ten-year US Treasury yields fall to 0.8 per cent. As a classic recession plays out and investors seek protection, government bonds, defensive stocks and gold rally.

Our earnings models are based on across the cycle relationship of corporate earnings with nominal GDP growth and the acceleration of real GDP growth of the domestic and global economy, and trade weighted FX moves. US Treasury bond yield model is based on US economic lead indicators, inflation expectation surveys and Fed balance sheet.

Can the Russian economy survive the sanctions imposed on it? And how investible are Russian assets?

Hugo Bain, senior investment manager, Russian equities: It is too soon to tell what the long-term repercussions will be for Russia. But it is clear that, in the near and medium term, all this looks devastating for the Russian economy.

The Russian government thought it would survive sanctions because the world was heavily reliant on its commodities. Yet the scope of the sanctions – and the speed of their imposition – has wrong-footed the Putin regime. We are now seeing the complete closure of Russia’s capital account. The freezing of the Russian central bank’s assets is especially significant as it deprives Russia of the shield it expected to use to protect its economy.

Where does this leave the rest of emerging markets?

Kiran Nandra, head of emerging equities management: Commodity exporters within emerging markets are clearly the most likely to benefit. That includes Latin America and the Middle East. This also chimes in with our top-level preference for value versus growth.

Asia, on the face of it, stands to lose somewhat given that it is one of the largest commodity importers. However, our macroeconomic research shows that the impact is still relatively limited. Within Asia, we’ve got the two giants: China and India. Both are still very much self-driven economies. They may be able to offer a degree of stability during this crisis, in particular Chinese  A-shares, which have shown lower correlations in times of greater geopolitical risk.

Will Russia default on its debt? And do its bonds face exclusion from major emerging market indices?

Mary-Therese Barton, head of emerging market debt: A default is perfectly conceivable. Russia clearly has the ability to pay, but its willingness and ability to pay are by no means certain. Even if we assume it is willing to make coupon payments, the sanctions imposed on it make that very difficult. Russia’s inclusion in major indices is also at risk. It is on ‘index watch’ right now and so far, we’ve seen no changes to its index weightings. But that probably won’t remain the case for much longer.

While the outcome of the war in Ukraine is unpredictable, it is becoming clear that this could be a significant stagflationary shock for the global economy. As a result, we are tactically downgrading equities and financials to neutral from overweight. In currencies, we are also downgrading the euro to underweight. And to hedge against the risk of an escalation of the crisis, we are upgrading government bonds to neutral from underweight and gold to overweight from neutral.

The surge in energy prices – in Europe, oil is up 20 per cent and gas prices are up 160 per cent since the invasion – will have an immediate impact on already surging inflation rates. At the same time, the effects of sanctions, both directly and through consumer and business confidence, will make it difficult for economic growth to re-accelerate and for corporate earnings to rise as rapidly as they did through the Covid pandemic.

Our original view was that a decline in stocks’ price-earnings multiples – driven by monetary tightening – would be more than offset by a rise in corporate earnings growth, resulting in modest gains for equities this year. However, this was based on the assumption of a strong economic rebound. The events in the Ukraine make this optimistic scenario increasingly unlikely. If anything, the risk of a recession, especially in Europe, is now material. Our analysis shows that when the oil price climbs 50 per cent above trend, recessions tend to follow with a short lag. So, given the clear downside risks to growth and high inflation rates that leave limited, if any, headroom for monetary policy stimulus, we believe that a more cautious stance on risk assets is now warranted. 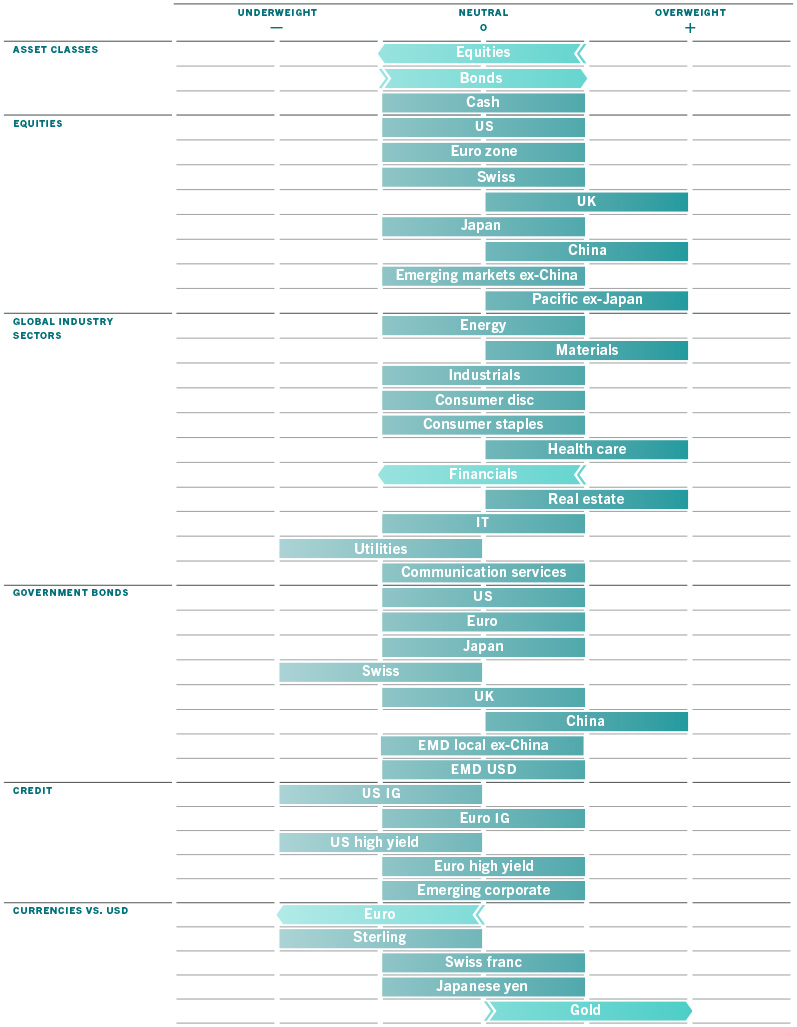 At the same time, we stand ready to re-allocate into equities once we see signs of a possible de-escalation of the conflict. Geopolitical shocks are typically short-lived and tend to be followed by big rallies once there are signs of a resolution. With the equities market already oversold before the invasion and with investor sentiment indicators very depressed and our measure of equity valuation back in a neutral range, there should be limited downside from here.

Europe is the epicentre of this geopolitical shock and euro zone assets are under severe pressure. There is already talk of European Central Bank intervention to support the economy.  However, valuations are still not cheap enough to offset the geopolitical tail risks of either a worsening of the conflict or of a severe recession in the event of a ban on Russian gas and oil.

Trade in your own style